Home Forum World Cup
Who's not that exited about the World Cup?... (Predictor)

Similar to what we did last WC, I'll leave you guys with the link to a website where you can build your prediction for the whole tournament and share it here.

Please add no more than 2 possible scenarios for the WC's development.

You can take a screen shot or download the image and then share it here so we can have a nice discussion. If you are too lazy just share the link and summarize your choices.

Hopefully everyone can contribute with a couple predictions.
e.g. I'll be posting one realistic prediction of what I think is most likely to happen and another one with a more biased input where I will show what I would like to happen.

Get your brackets going! 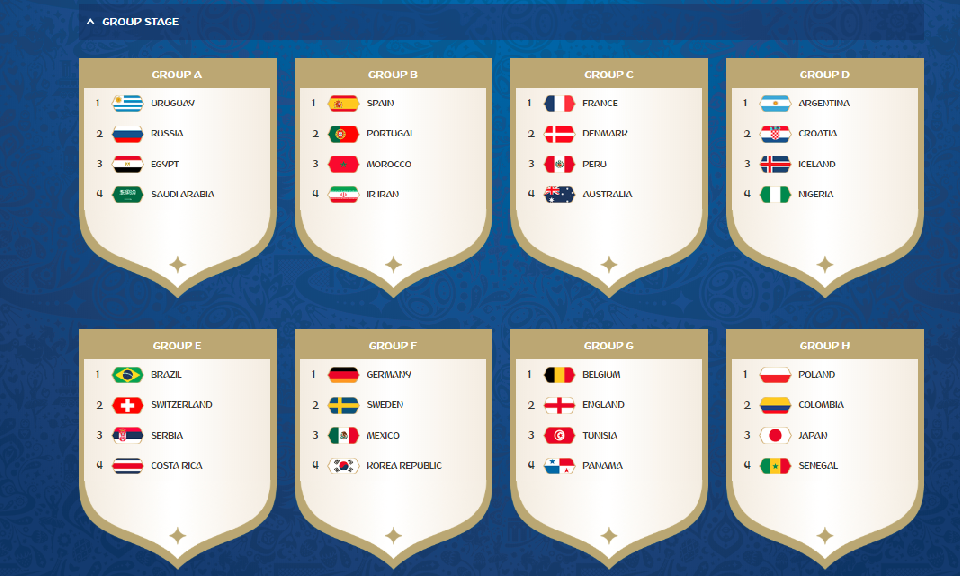 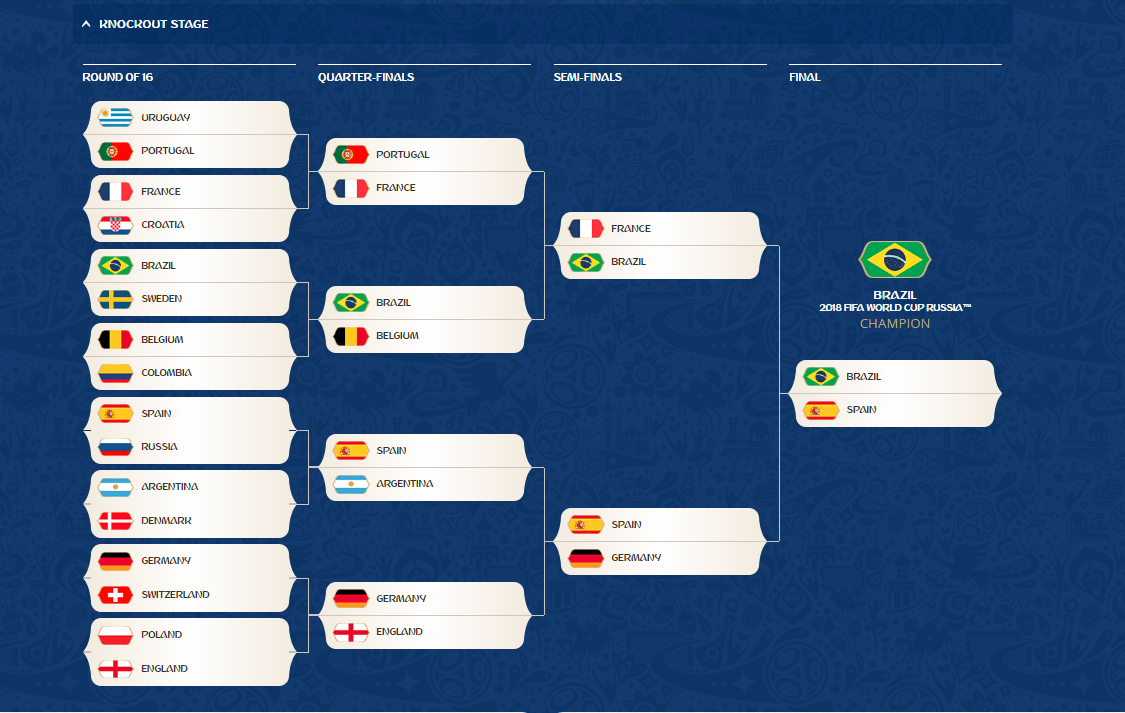 There's not much hype behind this world cup to be honest, people who aren't football fans are mostly oblivious to it unlike in previous World Cups

There's not much hype behind this world cup to be honest

yeah have to agree. there have been hardly any advertisements. and its weird, i should be excited because there are arguably 5 serious contenders (+my country is in it), but im not

Really excited! But yeah, there seem to be less hype than the 2014 and 2010 one. People in my country doesn't really seem hype for it. :( Shame but that what you get from having the competition in Russia I guess. Here my prediction: 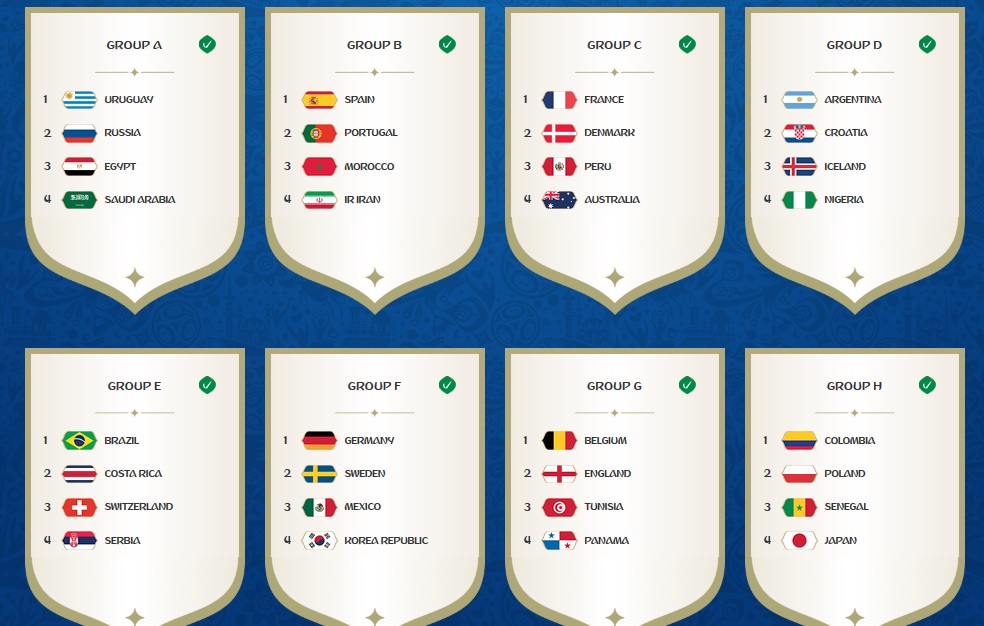 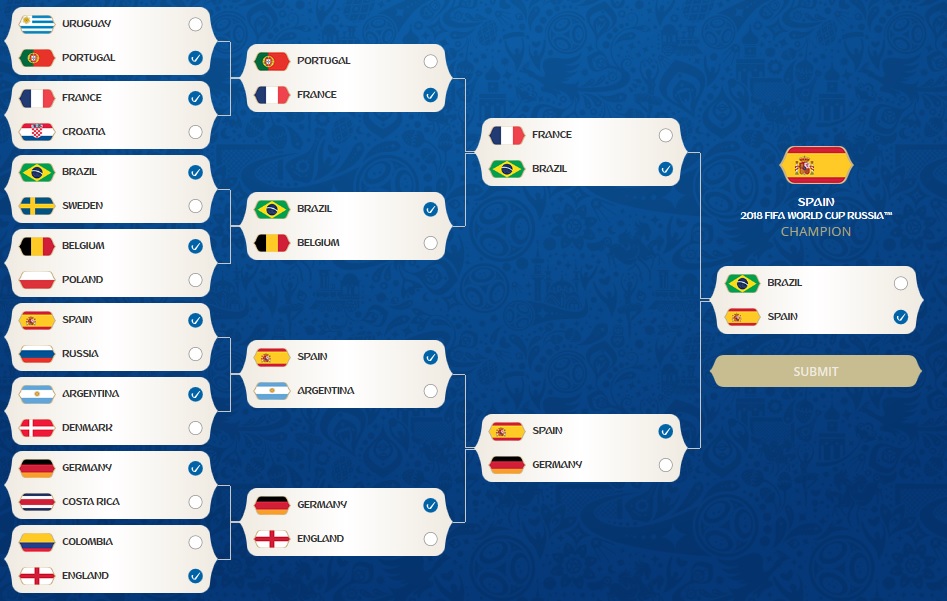 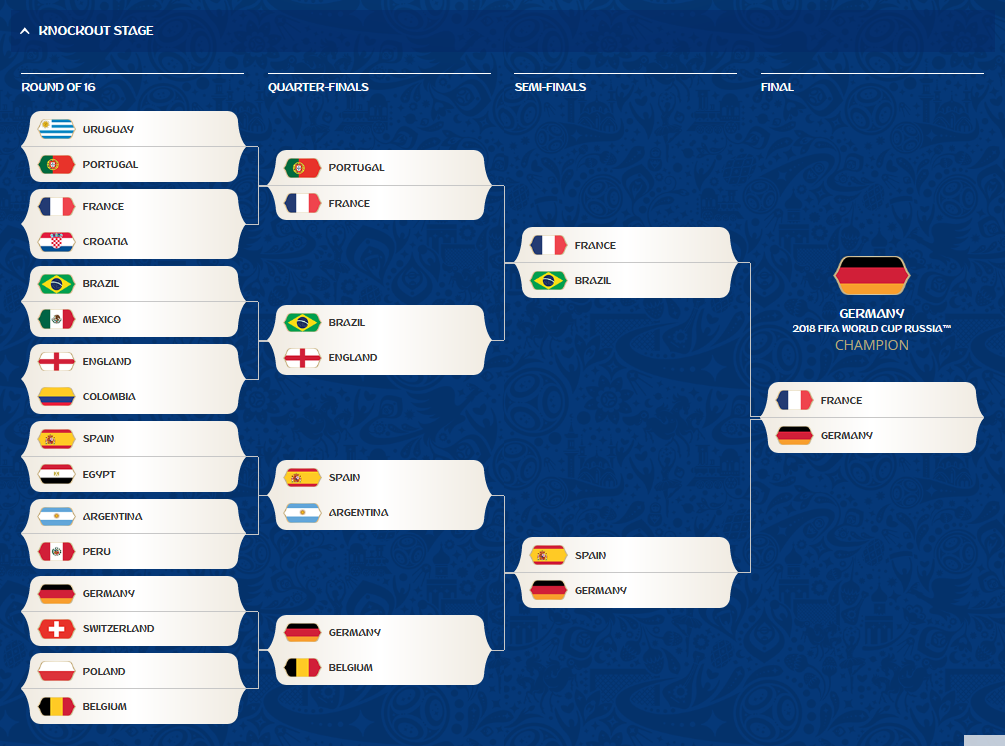 I was pretty hyped about WC's before, but not sure why, this one didn't catch me, hopefully it will change soon..

4 years has passed faster than light, just yesterday we were watching WC in Brazil.

@Dynast Very interesting prediction, not convinced Portugal could beat Brazil and Germany but its certainly an interesting thought.

@Yvan21 Now that would be a shocker, but it could actually be the start of something incredible for Peru.

I'm still with Portugal to win it, but Brazil's squad though

Don’t rule out Morocco, Portugal will suffer in groupstage, 0 goal conceded in qualifiers group of death with Mali-Gabon-Ivory coast over 6 games, defeating Serbia and Slovakia in friendlies, drew to Ukraine with their bench... Morocco is a serious case, more dangerous than Egypt and Nigeria imo.
My African level consideration : 1- Senegal 2- Morocco 3- Nigeria 4- Egypt 5- Tunisia.
Plus and it’s to be taken into consideration, Morocco is likely to get 3 pts vs Iran, Portugal is likely to loose to Spain. Then Spain has an easy game to Iran if they secure 6 pts and first place, they may put B team vs Morocco and a draw would be possible there...
Portugal must defeat a well organized Morocco in game 2 which is not as easy as it looks. If you watched Euro 2016 groupstage Portugal got 3 draws out of 3 games with Morocco caliber teams...

I don’t want to sound as a hater, I’m very neutral here but Portugal aren’t confirmed to get past groupstage yet... 70% chance to get through, 10% to end up first.

If Salah plays at 80%, I see another surprise in group A from them, Russia being eleminated. If not Russia will get through. Saudis have no chance sorry buddies.

I see Peru over Danemark in group C, no surprise in group D with Argentina and Croatia, Nigeria have great potential but they got weak coaching and their preparation is not optimal.

I don’t know much about Costa Rica level, didn’t watched them recently, if no surprise Brazil and Switzerland will go through unless Costa Rica create a surprise like in 2014.

Sweden vs Mexico is an even battle, both are well prepared and well organized. Both have collective and few individuals. I’d rather see Mexico going through because of previous robberies vs Brazil and Holland in 2014 and because Zlatan got denied a World Cup place. I don’t see Korea making it sorry buddies.

Belgium and England to go through for the easiest group imo, Senegal to challenge Poland for second place assuming Colombia topping the Group, I’m going for Senegal.

Why I’m rating African that high ? You will see why, most of teams lacked organization and tactical awareness knowing their big potential. All of them except Tunisia who drew Portugal in friendlies btw have incredible players and all of them are tactically prepared except Nigeria. The gap has been reduced drastically, Morocco got Herve Renard the White witch named in Africa, ex Sochaux-Lille coach, won the first CAN ever of Ivory Coast without Drogba and just before won the CAN with Zambia against in form Drogba-Yaya and co what was described as one of this last decade miracles. A great leader and Morocco is in his image. Egypt is leaded by El Neny and Salah with other players mostly from al ahly, betting players know this club probably strongest in Africa, and Nigeria has many PL players without forgetting the most dangerous one Senegal with quality in e ch position and a local coach who does the job.

South American teams aren’t to prove their worth they all look fierce and dangerous, there is a gap between Europeen top nations and middle ones. This gap Africa and Asia can benefit from it specially this year and in such a neutral location like Russia.

Only untouchable nations till Quarters will be Spain-Brazil-France and Germany. England having a highway may get there. No other team is granted to qualify imo.

I think Portugal are a better team now than they were at the Euros, which is why I have them winning it. I understand it's a long-shot, but I think Portugal have the quality and the drive to win as underdogs in matches against the likes of Spain, Brazil, France, or Germany - all four of whom are seen as being the favorites to win.

I end up with argentina vs brazil final.

I am always excited for WC, just sad that Holland aren't in it this time, they were super super amazing last time. Chile would have been good too.

Thanks, very helpful for keeping track of progressing teams.

Hum, here a less realistic prediction that I made just for fun: 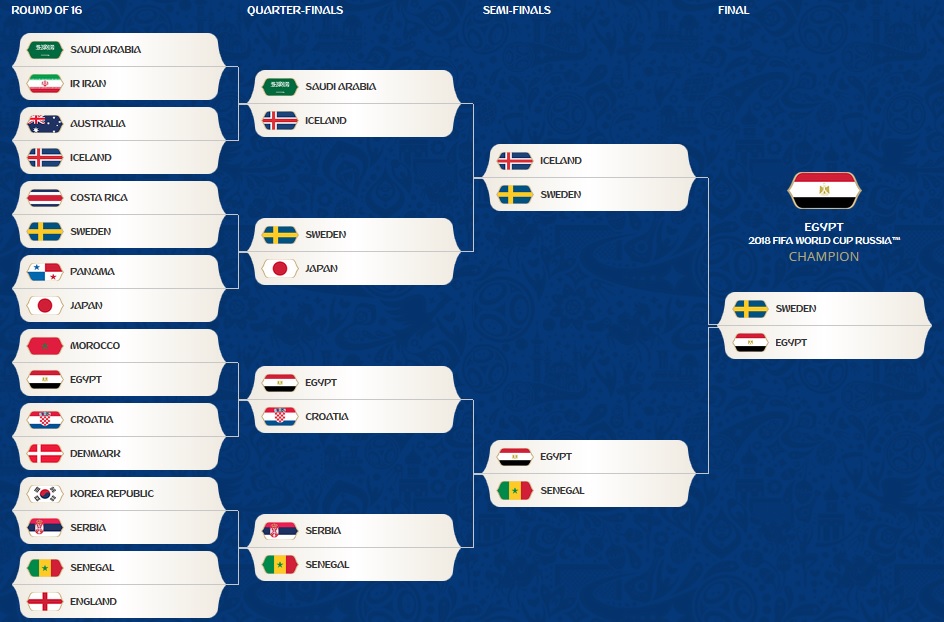 @Emo, you've gotta add Spain somewhere in there, so that Salah can get his sweet revenge.