We probably will hope to get Mou (who on paper so far is the best option out there - not for me though). 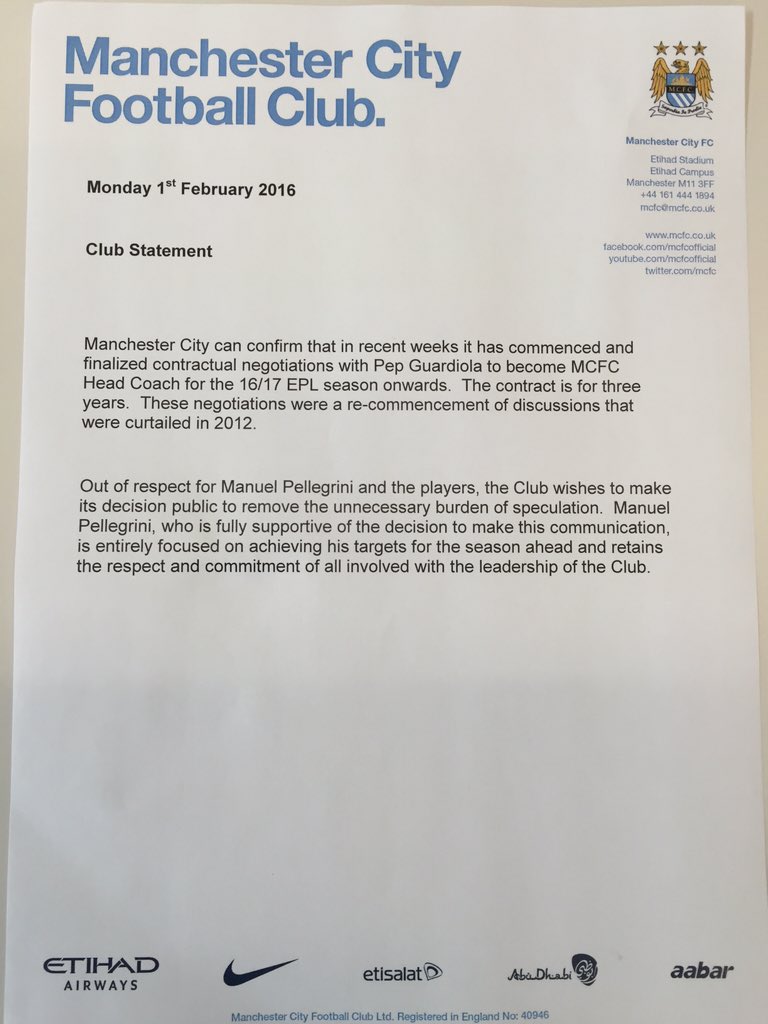 Liverpool have Klopp.
Arsenal have Wenger.
City have Pep.
Chelsea had Mourinho.
United has philosophy.

No idea who'll replace Wenger in few seasons. Klopp was my ideal choice.

Not a fan of Pellegrini , but this has been disgusting the way City has dealt with him . At least let him finish the job quietly and don't go public till the season over .

It all started with Guardiola announcing that this is his last season at Bayern . Dude stfu and announce it all you want at end of the season . Then he talks about respect to his fellow coaches and keeps it secret . Come on mate we know you going to City ...

I think Pellegini already knew about that but how must it feel? What if he somehow manages to win League, FA Cup, League cup and yet get sacked? Or even UCL, that would be weird as hell. @Marcus is right again.

And City are so savage for announcing this halfway through the season...perhaps Pellegrini now understands why they're a disgusting club.

I will never understand his intentions from here on out. My whole perspective of him has changed. This news is really depressing to hear. This means we'll have LVG for next season for sure.

Jkes, but this news is really depressing to hear. This means we'll have LVG for next season for sure.

I will never understand his intentions from here on out. My whole perspective of him has changed. This news is really depressing to hear. This means we'll have LVG for next season for sure.

Pep taking the easiest job, again. No surprise here. If he wanted a difficult task he should have waited for the United job or even Chelsea..

cant agree more with marcus2011.. but hey, since Pellegini is free.. maybe Pellegini to chelsea next season? or u guys still prefer Simeone? Jorge Sampaoli?

I was hoping Pep would land at United as I have always thought he was an exceptional manager. City will benefit and he will take advantage of the money they have. Going to be interesting to see how it all plays out.

I guess that leaves Mourinho for possibly taking the United job, or they leave LVG in long enough for Giggy to take it over.

Manchester United made no attempt to hijack Pep Guardiola's move to Manchester City, according to Sky sources.

@Marcus2011 - Fully agree, we need to take a leaf out of Chelsea's book on how to treat managers. especially the way Ancelotti was. That is the benchmark.

You come and go and don't know WTF you talking about . At least keep up with news . Majority Chelsea fans always strongly opposed getting managers sacked . Our board on the other hand is a c8nt , so are the many clubs . Modern problem impatience with managers . I am not singling out City .

You are the one who needs to keep with news. It has been Txiki's intention to sign Guardiola since 2012. He had reached an agreement with him a long time ago that he'd take over after Bayern. Pellegrini knew at the time of joining that he was going to have a three year stint.

We are screwed next year if LVG doesn't leave

It was Chelsea intention to sign Guardiola and if you look at this thread a lot of United fans were expecting the same . You are trying to justify the treatment Pellegrini received by being told while City are still in 4 competition .

@Fred, wait so they have been negotiating with Guardiola for the past 4 years but just NOW decided to break the news to avoid any "unnecessary burden of speculation"? Like Marcus said, it was a disgusting move by them. Essentially the only reason I can think of that they did it was to avoid backlash from fans for upcoming failures they might have in the league and Europe this season because then fans have something to look forward to.

I have lost a lot of respect for Pep. He is a mercenary and just like he left Barca and Bayern for cold, he is going to do the same at City.

This is not surprising. Pep takes the easiest job in the Premier League, and will easily achieve success. I feel for Pellegrino.

Tbh, I'll only respect Pep as a manager when he takes over a team that isn't top five in Europe in terms of money/skill.

I didn't want him at United, we'd be trading one rigid possession system for another, but I am annoyed that he's at City. He'll do well domestically, I'd be very surprised if he won a CL with them though. If he didn't with Bayern's stupid good team, why will he at City?

Easiest job in the EPL? Doubt it. City has been extremely average both domestically and in europe. A team with the aspirations and investments of City should be way above what they are now.
Goal posted a good article on why its not the easiest job like many claim. City just makes the most sense between all the choice he as. Yes, choices. Hes on that level where Pep can choose where to go instead of being picked.

Pellegrini is real classy guy and he was ok with them sharing the information now, he already knew this was his last season long ago. What difference does it really make?