Kazuyoshi Miura has signed a new one-year deal with Yokohama FC at the grand old age of 48. The new contract means his professional football career will span more than 30 years.

With a nod to the saying "you're only as old as you feel," Japanese striker Kazuyoshi Miura continues to defy the aging process.

Known as "King Kazu" in his homeland, the Yokohama FC forward has signed a new one-year deal that will see him continue to play professional football past his 49th birthday, the Japanese club said Wednesday.

In a remarkable career that has spanned more than 30 years, Miura's exploits have seen him play club football in South America, Europe, Australia and Asia.

"I'm thankful to the club staff and supporters who always offer me support," Miura -- often dubbed "the oldest footballer in the world" -- told Kyodo News.

"I'll continue to give everything I have and strive," he added, after the club confirmed his new contract at 11:11 a.m. on Nov. 11 as a tribute to the striker's shirt number.

Miura made his professional debut for Brazilian club side Santos as a 19-year-old in 1986, after moving to Brazil four years earlier to play youth football.

He managed an impressive 55 goals in 89 appearances for Japan, notching 14 in qualifying as he fired his country to the 1998 World Cup Finals in France.

The 48-year-old has three goals in 16 appearances this season, though he is currently sidelined with a thigh injury. 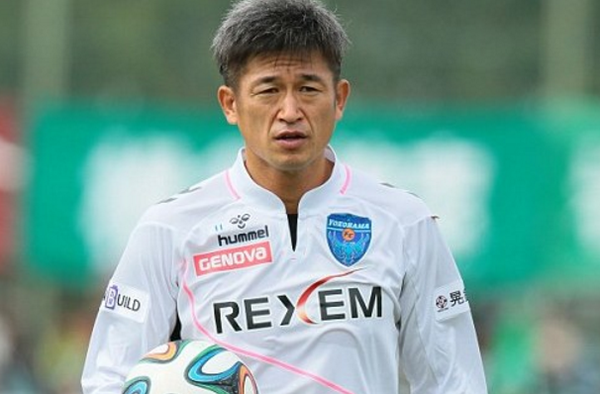 @mladen Yeah but Teddy had like a 7 years break ... not the same

@gennady Agree. Seen many ppl comparing this guy to Sheringham, not comparable when Sheringham has retired long time ago & now comes to play few games.

@gennady Agree. Seen many ppl comparing this guy to Sheringham, not comparable when the guy has retired long time ago & now comes to play few games.