Claudio Bravo is in Manchester, so the chance of hart being first choice is Zero. 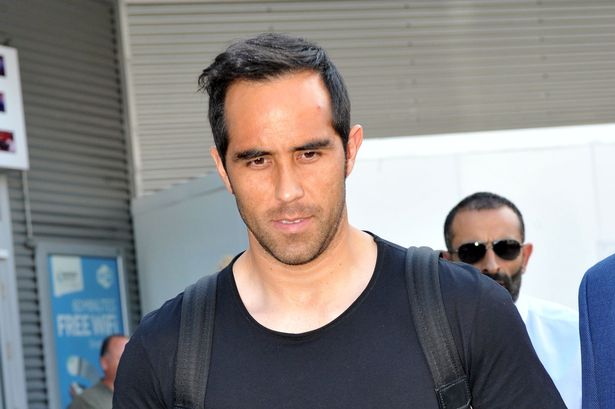 I rate Bravo higher than Hart, although Hart is an excellent goalie too.

Bravo has something Hart would have to work on is foot work.

There is no more major tournament, Hart should stay and fight for his place, he can learn and improve a lot. Give it a year, try and see.

Hart is much better than bravo and he is also younger, guardiola is making a big mistake.

^hart is a lot worse than bravo and bravo still has at least 5/6 years at his best.

Where ever Guardiola goes he steals Barcelona players >:(

Hart needs to get out of dodge. If Pep won't start him above Cabellero due to "poor foot skill" than he's never going to start above Bravo even if Bravo concedes five every game. There are several BPL teams in the market for a keeper as good as Hart, and I'm not sure anyone outside of England will be able to afford him.

Fact is, Hart's probably even or superior to Bravo in the net, but his passing is never going to be equal to Bravo, and if that's the criteria for Pep, there is no reason for Hart to stay.

Everton would be my guess.

Hart needs to get out of dodge. If Pep won't start him above Cabellero due to "poor foot skill" than he's never going to start above Bravo even if Bravo concedes five every game. There are several BPL teams in the market for a keeper as good as Hart, and I'm not sure anyone outside of England will be able to afford him.

Everton would be my guess.

Silly decision by Pep. Just because of better passing skills. I rate Hart overall as a better gk, also younger than Bravo. One of the City players who were there before their era started, saved them a lot of times. First you're going to get rid of Hart, next Yaya, and the other one will be probably Kompany. Either you win something or the fans will eat you alive Pep.

I did forget that Hart was there before City were bought out, that's an excellent point.

Hart is a good goalie and a pillar of Man City. I believe there are plenty of other teams that both want him and can afford him. Afterall, the price tag of goalies haven't followed the ridiculous inflated prices of other playing positons.

I believe Hart Should leave city because of the way he has been treated, It is not real fair the way hes been treated how he has. He has been reasonably solid since MC have risen, i think hes good enough to stay. But i think he will leave, he definitely has the quality to be a first choice keeper at a lot of the premier league teams.

Hart actually said last summer that he wants to be a legend at city and win more titles.

In my opinion Hart is better than bravo but i don't think he fits into peps team. Bravo has a lot of experience.

@KTBFFHSWE Of course a lot of teams will want him, but where can he go? Going to teams like Everton (not anything against them), but he certainly deserves something more. Maybe Borussia ?

Hart doesn't deserve this really but he has to respect his managers decision and since the board does not really care...

They should at least respect and allow him to choose were to be sold I don't think they need the money that much.

Im sure Hart wants to stay and he would shelter for no less than a CL qualified clubs.

If he wants to stay, he MUST work on his footwork, that's almost a must for Pep's philosophy. If the board has chosen Pep and the fans are happy with it (they have no choice anyway), then they should have seen this dilemma coming. Such for Hart though.

I think Barca would miss Bravo much more