Paulo Bento was fired after 7 months being the Greece's champ manager - Olympiakos, after 4 consecutive lost in the league...

Im not comparing to Claudio's sack because that one is pretty insane, this one is just too short patient.

FYI, it's not that bad... Olympiakos is currently #1 of the super league and 7 points above the second one Panionios (just recently came to life after those 4 games) :D. Yea you read me right! 7 freakin' point ahead. The rotation bites him now. :D.

And to add salt to the wound, Olympiakos is still in 3 different competitions, they just manage to go to 1/8 round in Europa League (to face Besiktas), and about to win Greek Cup... :(

The former Portugal's coach is suffering from somewhat the cruelest sack :D.

What do you think? 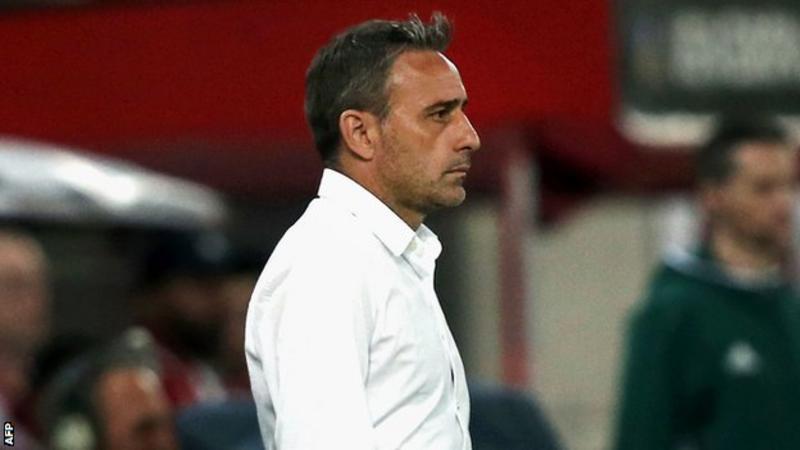 Just checked the greek league, they only have 3 losses in a row. This is just stupid imo..

I know right... if that was Pep, Mou or especially Wenger... those loses are like a mosquito bite...

Are those 3 losses the only factor? I can't pretend to know anything about Greek soccer, but if that's true that absolutely unreal.

@SunFlash: I dont know either, but appears to be so... Olympiakos sacked their previous coach after just 2 months... they are known for short patient.

According to the board, winning Greek league for them is nothing but the least requirement, something out of ordinary, they only came 2nd two times in the last 20 years or something as far as I remember... so they DO have very high expectation...

Regardless, this is ridiculous IMO

Countries like Greece, Turkey, Italy etc have short patience when it comes to managers. They just don't except anything less than expected. They don't have any long term plans.
They will probably play better now against us.

Not everyone has the money to be patient. Olympiacos played Champions league and won vs Manchester United,Atletico Madrid,Juventus,Arsenal just some years ago, for them to dominate their own league is much expected so to struggle at any way is seen as a big issue.

Indeed,
May be. It's a culture thing, but it makes everything look insane, especially in this case.

Now the big question is, there are a few big clubs looking for new manager. Anyone think that Bento becomes available would change anything?

The main reasons were two. First of all he wasn't producing spectacular football and he was not using half the roster many big names included like Alejandro Domínguez and Cambiasso, it felt like he was biased against some players Marko Marin included, he was over playing Oscar Cardozo who never managed to adapt to his new team, even though very experienced striker he was barely scoring. So all the situation made the fans to start pushing the administration to fire him. To his defense he was using many young players and was promoting them. He also lost many of the core players like Brown Ideye, Omar Elabdellaoui , Luka Milivojević, among others, good players mid season, who most of them moved to the Premier League, so basically the team became weaker.

@0only1: WELCOME to FR mate. So nice to see an actual Greece and Olympiacos fan here.

Now that makes sense, that's what we would like to know what happened there.

With that being said, and with all the infor you have given, I still think it's too harsh... Such changes needs time to prove if it works, loosing big player to EPL has little to do with him, but the transfer policy of the club and the financial status.

I like the fact that he is giving chances to youngster when possible (10 points ahead on top of the table etc...), why not. 7 is still securing.

I can start to see where it's coming from but, trust me, compare to any other team this is too sudden and cruel.

Thanks a lot, I hope I ll be able to provide good insight about the Greek football whenever the community will need it.

Just to clarify, Olympiacos as a club has the tendency to fire coaches quite easily its not just Bento, they have done it many times in the past. Coaches had their contract terminated even after winning titles just because they were not producing "good" football.

If that helps, I will let you know that Ernesto Valverde is the most loved manager who passed from Olympiacos and the reason is because he was combining success with enjoyable attacking football. Leonardo Jardim got fired mid season with out having lost a single game, just because he was playing very defensive football. Also in Olympiacos they tend to fire coaches in order to "shock" the team and get back on track. Many good upcoming coaches have passed from Olypiacos but very few managed to provide the right package. Another case is Takis Lemonis (Greek coach, ex Olympiacos player, loved in the club by everyone) he won the league and managed to quality to round 16 of champions league later lost to Chelsea, next season got fired. Míchel same story. Wins the league, qualifies to round 16, loses to Man United, next season fired because he wasn't winning against the big rivals...

I know it sounds weird but keep in mind that we are talking about a club that has not lost 3 games in a row for like 20 years... Also, Bento has been the 3rd coach for Olympiacos this season and we are going for the 4th atm... Crazy right ? :D

@0only1 Wow, nice to meet you mate and welcome to the forum. Very interesting share as well. :D

Have the fans ever mentioned anything about it???

I understand the motive the tradition but it seems heartless to me :D

^pretty much what i was about to say

Internal clashes with Fourtounis and Dominguez led him to the sack and it was pretty much deserved. Olympiacos wins the league faster than Bayern does every year. Even if they dont have the best form in the game the refs will also give the extra helping hand like all the big teams get nowadays.

Yet like the guy who pretty much explained the situation you all missed why Bento got sacked. For the last 5+ years Olympiacos loses his form and momentum and the 2nd part of the season. There was a season they destroyed Klopp's BvB and Marseille in France and they got knocked out by a Ukranian team because they were bored to defend the last 10 minutes. Want another one? Olympiacos beated Atletico 4-2 and Juventus 1-0 and then lost to fkn Dnipro that went to the finals and lost to Sevilla. It is simple Olympiacos always colapses at the 2nd part of the season.

Also a vital reason Olympiacos is not strong anymore is the Presidents bribes and league scandals all over the years. So many fans dont go to the stadium anymore because they can't be happy when Olympiacos gets constantly the calls on his side. Years ago Olympiacos had a fortress not a stadium not even Atletico and Juventus managed to get past it and now this power is lost. 3 years ago Besiktas would never manage to get a draw at Georgios Karaiskakis not even in their wildest dreams with that atmosphere.

Olympiacos should get relegated for their crimes towards Greek football and start all over again. Besides with their youngsters it will take them 3 years to come back because they have the best youth team in Greece but whatever Olympiacos will always be the same thanks to their bastardo of a president. They will buy 1 old player which was close to world class in his youth and 1/2 decent players as buys, then he will loan a bunch of trash La Liga CB's and he will say Olympiacos wants Europa with this ''awesome'' transfers to hype the fans but this does not work anymore. Also take note all Olympiacos CB youngsters since their first game took the starting positions of their loanie CB's. When this happens Olympiacos changes manager and the manager repeats the proccess I explained above.

Vital role to their performance is that they win all competition in Greece from September and sometimes give the Greek Cup to lesser teams so they dont whine a lot about Olympiacos winning fk all.

While Bento was from the few managers that he actually deserved the sack, there have been so many that they did not. Even Valverde left Olympiacos because he was feeling guilty for winning in such a corrupt league.

Before any Olympiacos fan snaps out of his hole.

Rivaldo was a player of Olympiacos and he left to another Greek team because he was sick of the corruption.
Cisse left their rivals after a big robbery in a derby.
Manolas only joined Olympiacos to see himself in Europe and get a transfer away from the joke league

and many many more examples