One of football's living legends, Lionel Messi, is on the verge of making a huge move to French club PSG following his departure from Barcelona.

Messi has always been one of the top cards in FIFA's Ultimate Team, with the Argentinian player rated in the 90s overall for the past few iterations of the series.

One of the big features of Ultimate Team is pack openings, with the concept still being a big part of the YouTube community behind the EA game.

Although FIFA 22 may have a different system, the FIFA 21 format for packing a major player could cause headaches for Ultimate Team players hoping to pack Messi next season, assuming it is kept to a similar format.

The game currently will show the level of player (Special, Gold, Silver or Bronze), followed by their Nationality, then Position, followed by Club and finally the reveal of the player.

So, players hoping to pack Messi, should his move to PSG be finalised, will see Gold, the Argentina flag, then RW, then PSG, get really excited...and potentially see Angel Di Maria appear on the screen. 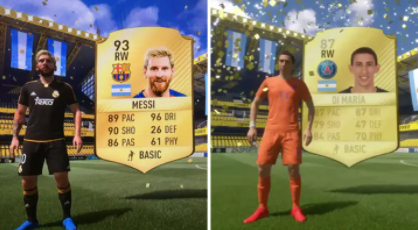 Packing Di Maria instead of Messi

Granted, Di Maria is a good player; in FIFA 21, he had an overall of 87, with decent stats across the board on pace, shooting and averaging out at around 20,000 coins for the base card in-game.

But, if you were expecting to see Messi appear? It will probably be one of the more heartbreaking moments for FIFA Ultimate Team players in FIFA 22, again, only if Messi does, in fact, sign for PSG.

This wasn't an issue for players in FIFA 21 when Messi played for Barcelona. Messi was the only higher-rated RW for the club who was Argentinian, so when you saw the tease for the player, you had an excellent indication of who was going to appear seconds later.

Although this isn't something that people may have picked up on yet, it could be the basis of some pretty hilarious pack opening videos for FIFA 22 when the game is released later this year.

Prepare for disappointment, but a fairly decent winger in Di Maria anyway.

If Messi goes to PSG imagine opening a pack on Fifa 22, seeing RW, 🇦🇷, PSG then getting Di Maria.😂

Imagine messi transfers to PSG, u open a pack on the new fifa and see RW,Argentina and PSG and get hyped thinking u packed messi but end up with di maria 😂🤡😂🤡😂🤡😂

Imagine packing Di Maria on Fifa 22 and thinking it is messi pic.twitter.com/JumE9wCL7q

Lol, lets wait after he sign to worry about that. XD

But, if you were expecting to see Messi appear? It will probably be one of the more heartbreaking moments for FIFA Ultimate Team players in FIFA 22

Every experienced player who plays FUT knows that when you see RW & Argentinian flag it's gonna be Di Maria, don't give yourself a fake hope guys!