His father, Jorge Messi, was also given a jail term for defrauding Spain of €4.1m (£3.5m; $4.5m) between 2007 and 2009.
They also face millions of euros in fines for using tax havens in Belize and Uruguay used to conceal earnings from image rights.
However, they are likely to avoid jail.
Under the Spanish system, prison terms under two years can be served under probation.
The footballer and his father were found guilty of three counts of tax fraud in Wednesday's ruling by the court in Barcelona.
During the trial, Lionel Messi claimed he "knew nothing" about the management of his financial affairs, saying he was "playing football".

Argentina and Barcelona footballer Lionel Messi has been sentenced to 21 months in prison for tax fraud, Spanish media say.
His father, Jorge Messi, was also given a jail term for defrauding Spain of €4.1m (£3.2m; $4.6m) between 2007 and 2009.
During the trial, prosecutors said tax havens in Belize and Uruguay were used to conceal earnings from image rights.
But Lionel Messi said he "knew nothing" about his financial affairs. (BBC, Sky Sports ....) 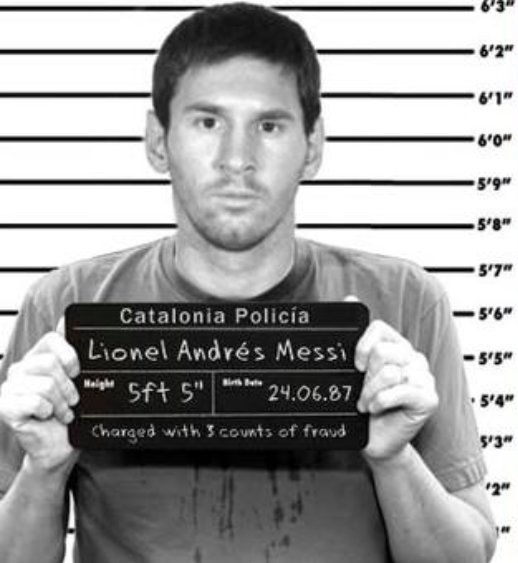 Yeah ofc, I also know nothing about my own money affairs, as all of you footyroomers have no idea what your money's actually doing, right?

Sounds totally plausible to me.

Nobody is perfect,but this is just too much by Lionel Messi. WHY the hell is he doing this ? Is his brain washed by money ? Failing to make impact for Argentina is not big thing,I feel sorry for him cos of that,but this is just ridiculous !

no one is going to jail. mascherano was in the same situation and neymar is also in the same situation. people need to relax. Whatever they did, whether they knew about it or not, it's being dealt with. nobody gave a single f.ck while it was happening to mascherano, but the whole world shames messi....let the man live in peace.

Anyone know what happened to benzema?
Apparently he was also supposed to go to jail.