What an entertaining match it was!! Southampton were clearly the much better side, but in the end, United came out on top by two goals fro the big man himself, Zlatan and a very neat goal from Lingard who seems to love Wembley scoring in the Community Shield, FA Cup final and the EFL Cup final! :D Southampton had a goal wrongly disallowed early on, then scored two goals either side of half time in a great comeback, then hit the woodwork later on but were unfortunate to lose!!

To be honest, i thought that the Saints deserved to win, but nonetheless i am very happy that the Red Devils managed to win!

What are your thoughts of the game? Leave them down below!! And, as always, keep smiling!! Lol! :D 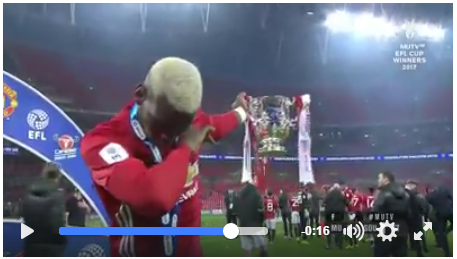 Wasn't expecting the ref's to give UTD a Spanish top team referee behavior by disallowing a goal, kinda dissapointed at this. Any Saints fan would feel robbed because the game would be completely different with that goal. Anyway congrats on winning the cup :)

Edit: Did anyone notice Mourinho never smiled during the game even in the goal? He was so dissapointed as I see it personally from the players performance.

Wasn't expecting the ref's to give UTD a Spanish top team referee behavior by disallowing a goal, kinda dissapointed at this. Any Saints fan would feel robbed because the game would be completely different with that goal. Anyway congrats on winning the cup :)

What a result that was!! Sure, we didn't perform particularly well, but we had the winning mentality!! Come on United!!

Still a trophy even in a bad season.

The only question now is if it's going to be easier for United to qualify to the Champions League through Premier League, or Europe League...

I understand what the linesman is thinking, but he's just wrong. Still don't get why people are against video replay, but whatever. I would say it's balanced out by the two occasions in the second half where Southampton should've had second yellows, but in reality that's just trivial. Not a well-reffed game at all.

Southampton deserved the trophy, but United got it. Happens sometimes. I think Gary Neville was right when he said that United were playing in moments, shite generally, but a couple of good sequences is all it takes sometimes.

Bitter for Sou since they were clearly a better side. But well, thats football. :D.

my dad's still not happy. apparently ferguson used used to play his youth team in this cup. united have just gone DOWN!!!!
I dont think theyll be up again for quite some time now to be honest. they just dont look the same as before anymore.

I remember when we won it in 2009 that sure as hell wasn't a youth team. I remember the pk's being taken and they were all by pretty established United regulars.

^my dad said it was.