"It is now the most famous moustache in France"

He didn't play at all in Russia, but defender Adil Rami still played a strangely pivotal part in his side's World Cup triumph. 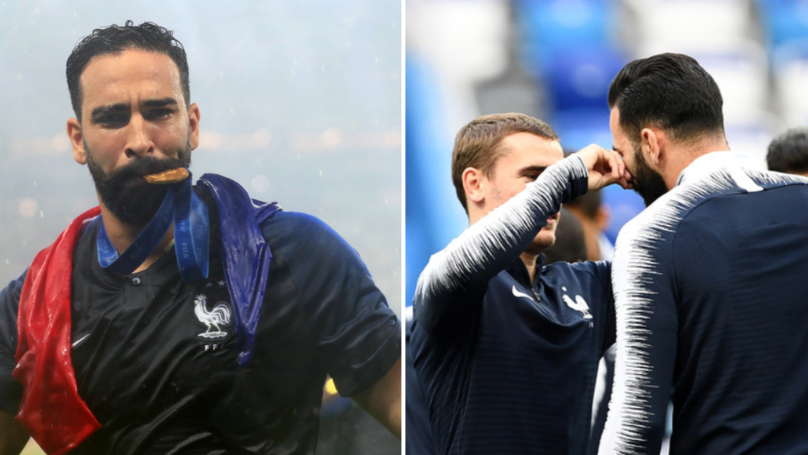 "Antoine Griezmann touched it before the game, and even the manager did to bring luck," Rami told TF1.

"It is now the most famous moustache in France. I will keep it."

Rami's lucky moustache began working its magic with Antoine Griezmann, who started touching it prior to France's group games with most of the squad gradually following suit throughout the tournament.

Pamela Anderson was also frequently seen in Russian cheering on Rami as France advanced during the competition.

She sparked engagement rumors earlier this month after she was seen wearing a large ring that is estimated to be worth over $25,000 on her right hand while in the V.I.P. box during France’s game against Croatia.

Not a bad year for Rami. Do nothing, win the world cup, date Pamela Anderson :)

Apparently, he's retired from international football now as well. Even more time to spend on Pammy and the moustache :P

Well, France has always had this kind of lucky charm. In 1998, and later, Fabien Barthez's bold head was the famous lucky charm.

Blanc always kissed Barthez's head before and after the game. Called: "the kiss of luck"

@tuan Yeah, immediatly thought about Barthez bald head after reading that thread. :D Guess France will alway need a lucky charm to win the WC. Which isn't a bad thing in itself. ;)

@tuan Yeah, immediatly thought about Barthez bald head after reading that thread. :D Guess Franc will alway need a lucky charm to win the WC. Which isn't a bad thing in itself. ;)