Ferran Torres has been working hard off the pitch to encourage kids to be environmentally friendly.

Torres have developed a kids camp that provides children from the ages of five to 16 the opportunity to take part in an unforgettable week of football, fun and festivities.

However, this time round he has decided to teach the children about sustainability by taking them to the local beach to pick up plastic. 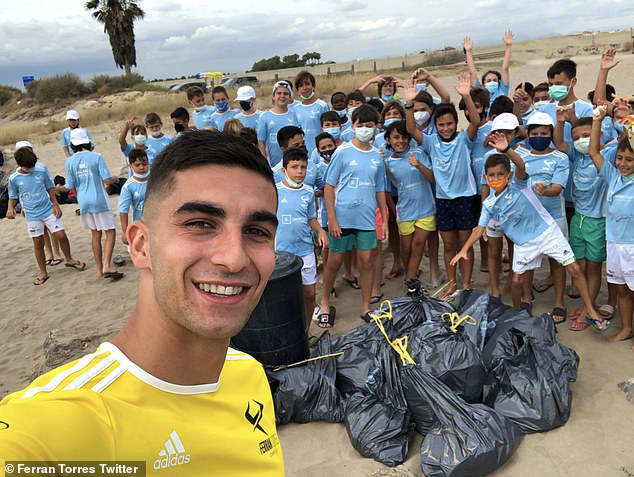 The Manchester City winger said he was 'leading by example' when he took the children down to the beach to begin the clean up.

Over 40 children were involved in the beach clean up - collecting at least 13 bing bags full of plastic.

Torres - who is originally from Spain - signed for Manchester City from Valencia for £20.8m plus bonuses less than a year ago.

The 21-year-old winger hit the ground running after touching down in England - scoring 13 goals in 36 appearances for Pep Guardiola's side.

He also picked up the Premier League title in his debut season after Manchester City cruised at the top of the table for the 2020-2021 campaign.

Torres will be hoping to keep up the good work as he heads into the 2021-2022 season with the Citizens.

Great stuff. Bravo to him

If people didn't litter so much. Great donation by the lad.