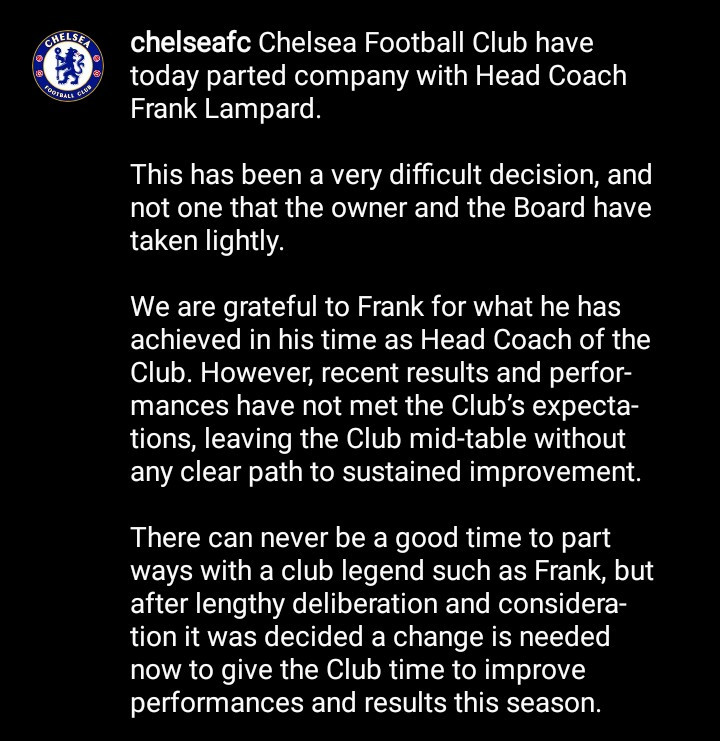 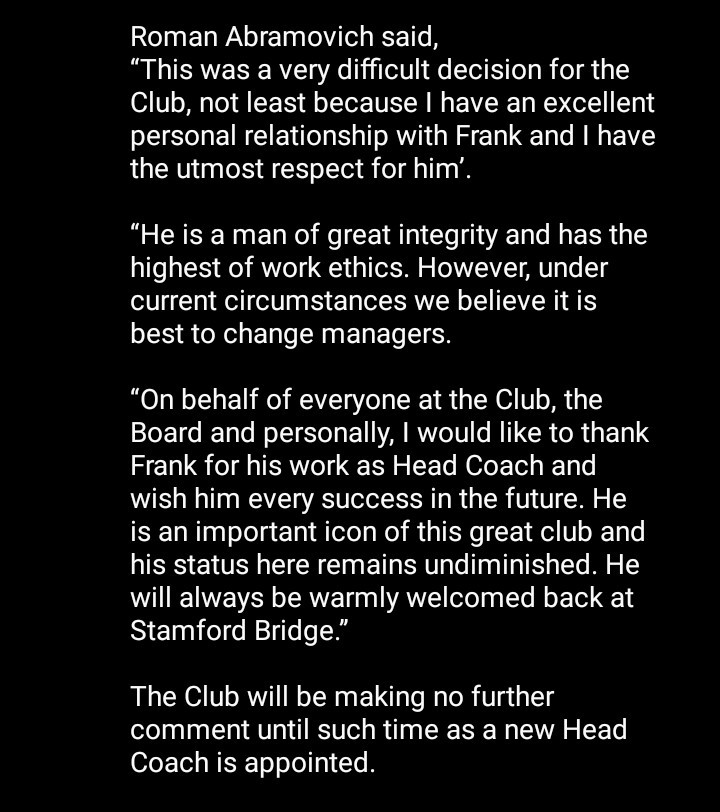 The owner is not one for patience so not too surprised there, but you only have half the season left. Unless they have someone lined up already (Tuchel?), one who they think will get the team up to Euro spots, this is just silly. Now, they are only 11 points off first and the season has been pretty crazy, so ya never know.

Was it Lampard not being able to handle the squad, the pressure, the owner? Chelsea fans, please advise.

Man, this suck, came as soon as I heard about this. I mean, its not really surprising, Lampard himself know his statut as a club legend didn't protect him but that doesn't mean you want stuff like that to happen. What a sad news and also propably not a necessary move from Chelsea like DarthFooty said. Let see who come and how they do. At the very least, this will put pression on the player to perform.

Apparently players were complaining that Lampard doesn't give them enough tactical talking, what's kinda sad is that Lampard wasn't allowed to say goodbye to the players on the training today. Tuchel is already in the talks as Chelsea board hopes that German speaking manager will help Werner & Havertz.

Shame, Lampard is one of my fav players from older generation, wishing him good luck.

@quikzyyy If that is true (players were complaining that Lampard doesn't give them enough tactical talking) I can understand why since he is a new manager. At the same time, I am surprised he didn't cover it more with some of the high-level managers he has had in his playing days.

Chelsea has had quite a few managers since 2000. You gotta win or you are out. The brand is a business, and it can be very impersonal.

He will rebound and be better because of this. He is a better coach today, than a year and a half ago, because of the experience.

What did the Chelsea fans think about this? Did you rate Lampard? Or think he wasn't good enough?

Absolutely gutted. Yes, there times when I was frustrated with his team selection, and against Leicester we looked like we had no plan, but he deserved time. Put aside all the emotional connection to Frank and how much we love him and what he's done for us, He did extremely well to finish 4th last season with the transfer ban and Eden Hazard being sold. He took the job that realistically no other manager would, made even more of a challenge by his inexperience. This season we have been inconsistent, yes, but who hasn't. Current leaders Manchester United got drubbed 6-1 earlier, are out of the CL and lost their first game to Crystal Palace. This is before the fact that you even consider the squad upheaval in the summer with a number of new incomings, who need time to gel. It happens every time you bring in many new players - they really do need the time. Let alone the fact that they have moved from different leagues, and during a very weird time where they cannot get to know their team mates properly. And that's even before you consider the fact we had no preseason to prepare.

Beyond the obvious results and performance of the team, huge credit has to be given to Frank for bringing through the youth products into the first team. He can take personal responsibility for bringing through Tammy, Mason, Reece and Billy, (not including Callum as he broke through before Frank) in a way that no other manager could have. As a Chelsea fan I absolutely love that, and often have to pinch myself when I see them all playing. From a commercial standpoint too, the board should recognise the values of these players since Frank's stewardship. Don't tell me Mason Mount isn't worth at least 5x what he was worth before.

I truly believe Frank deserved until at bare minimum the end of the season. To replace him with TT, a divisive manager with an uninspiring track record, just adds insult to injury. There would have at least been a semblance of logic if he had been replaced with a formidable winner like Max Allegri.

This decision doesn't stand up to reason and is a damning indictment of the culture at the club. If Frank couldn't change that, nobody could.

I don't think Tuchel has an uninspiring record. I rated personally but I do think Tuchel will do a good job. It was just sad that most of the signings were his, probably would have done better otherwise

I’m surprised I got it so spot on... I’ve been saying that Tuchel should go to Chelsea, even wrote it here somewhere.

I liked him in PSG and have a feeling that his pilosophy will suit them well.

For all their faults, Chelsea have always demanded excellence. That's an admirable trait and Lampard was not delivering.

I liked Pep's quote about projects. Projects are not as valuable as winning in English football. Guess we saw that play out again.

Thats true but we are the exception to that quote. For Arsenal the project is more valuable than winning. If people like me had a say, Arteta would've been sacked long ago. I support Abramovich's winning mentality. We have been missing that for almost 2 decades.

Thats true but we are the exception to that quote. For Arsenal the project is more valuable than winning

Thats true but we are the exception to that quote. For Arsenal the project is more valuable than winning. If people like me had a say, Arteta would've been sacked long ago

Reality is that Chelsea wasn't doing good enough, and manager is a trampolin spot, he must "die" so that the team lives, basically. So, it's harsh but it's the reality of modern football