We are living in an era totally dominated by the brilliance of Cristiano Ronaldo and Lionel Messi.

Arguably the two greatest players of all time, the pair have shared 11 Ballon d'Or awards between them and continue to blitz the record books.

They both broke new ground on Sunday night, with the Barcelona forward making his 500th La Liga appearance for the club and recording his 200th assist.

Ronaldo's weekend efforts were even more impressive though, as he scored his 757th and 758th career goals against Udinese in Serie A.

Presumably, when you've rustled the net THAT many times, these moments start to blur into one dazzling fog of your own greatness. The Portuguese won't be forgetting that brace any time soon, however, as it ensured he surpassed Pele's tally (757) of career goals.

The 35-year-old isn't quite number one in the all-time list yet - that honour belongs to Josef Bican (759).

But beating Pele is still some feat.

There is a little confusion surrounding exactly how many goals the Brazil legend actually scored, but he's notoriously proud of his record.

Why is Pele's record so controversial?
The World Cup winner has every right to boast of being one of the all-time greats and for a generation, he is still regarded as the finest forward ever to grace the pitch.

Indeed, they might be wondering why we are only crediting him with 757 goals. It's often cited that he in fact scored in excess of 1,200 times - but that includes goals from friendlies, tour matches and from his time in the army.

The records from the 80-year-old's playing days aren't as complete as they are today and there is particular uncertainty about his stats in South America.

So the figure of 757 comes from his verified goals - that is to say, those he scored for Santos, New York Cosmos and the Brazilian national team.

It's no secret that the man himself prefers to refer to his aforementioned, four-figure tally. If that were how we were to judge him, he'd likely never be beaten.

Pele's Instagram activity
But just as he has been eclipsed by Ronaldo, with very curious timing it's being claimed that he's updated his Instagram bio.

Under '3x World Cup Champion', he's put in the line 'Leading Goal Scorer of All Time (1,283). ESPN are among those suggesting that's a new addition. https://www.instagram.com/pele/ 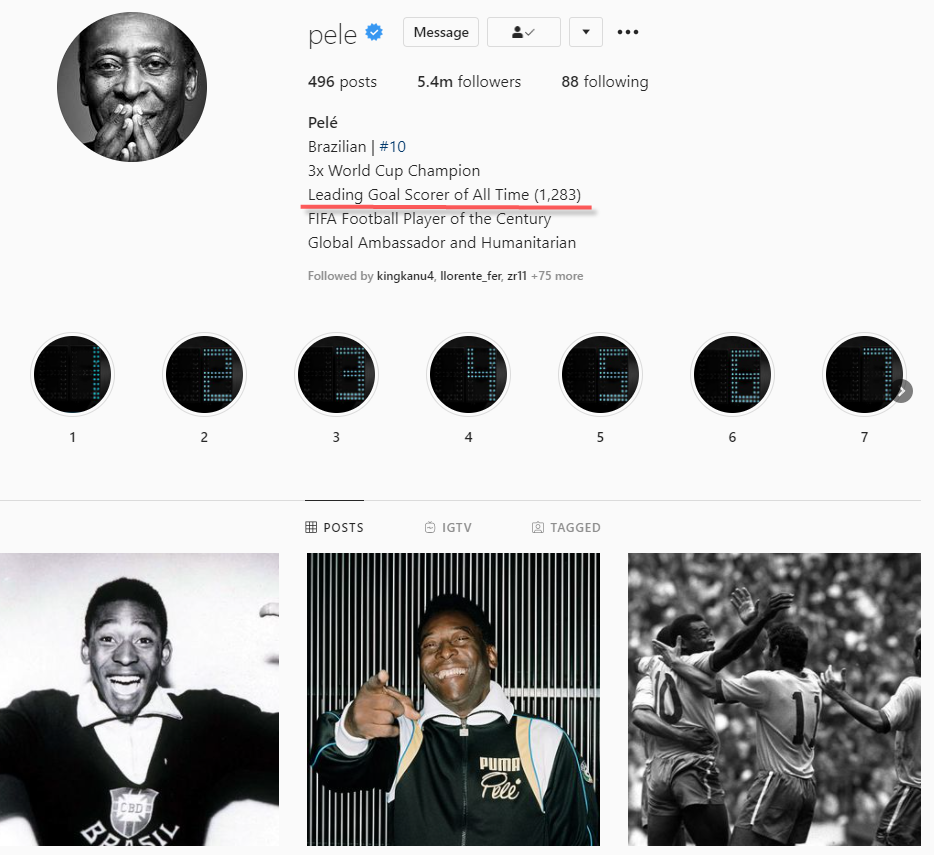 Dear, oh dear. It looks like Ronaldo's exploits haven't gone down too well.

It seemed only a matter of time before the former Manchester United and Real Madrid star moved up in the charts, particularly after surpassing 40 goals (yet again) for a calendar year in 2020.

There's no sign of him slowing down, so he could be well clear of Pele by the time he hangs up his boots. Well, Pele's actual record, anyway.

Technically speaking,wouldn't Pele at his age have tons of conselor and people taking care of his social media for him? Wonder if its him that decided to have his account updated or if its his employee?

Apparently, Pele has come out to say that he did not update his account to say any of that, so it must have been a staffer or something.