Again, this game worth talking about guys.

Brazil is on top form since the new coach Tite who is bringing new face to the team. Neymar and co. are showing some impressive football. They say to have plan to stop Messi :D:D:D. Will play with 4-5-1 - Neymar and Coutinho on the wings, would be very scary.

Argentina, currently in 6th position, has been quite mediocre in their last games (largely due to the absent of Messi at the beginning and recently, winless in 3 games), but they are welcoming back the captain. Bauza plans to make some weird changes: 4-4-2 with Higuain and Messi (so he dropped the on-form-club Aguero - but off-form-country)

Again, this game worth talking about guys.

Brazil is on top form since the new coach Tite who is bringing new face to the team. Neymar and co. are showing some impressive football. They say to have plan to stop Messi :D:D:D. Will play with 4-5-1 - Neymar and Coutinho on the wings, would be very scary.

Argentina, currently in 6th position, has been quite mediocre in their last games (largely due to the absent of Messi at the beginning and recently, winless in 3 games), but they are welcoming back the captain. Bauza plans to make some weird changes: 4-4-2 with Higuain and Messi (so he dropped the on-form-club Aguero - but off-form-country)

Brazil has been playing 4-1-4-1 under Tite most of the time.
Below is the lineup prediction from Brazillian commentators. 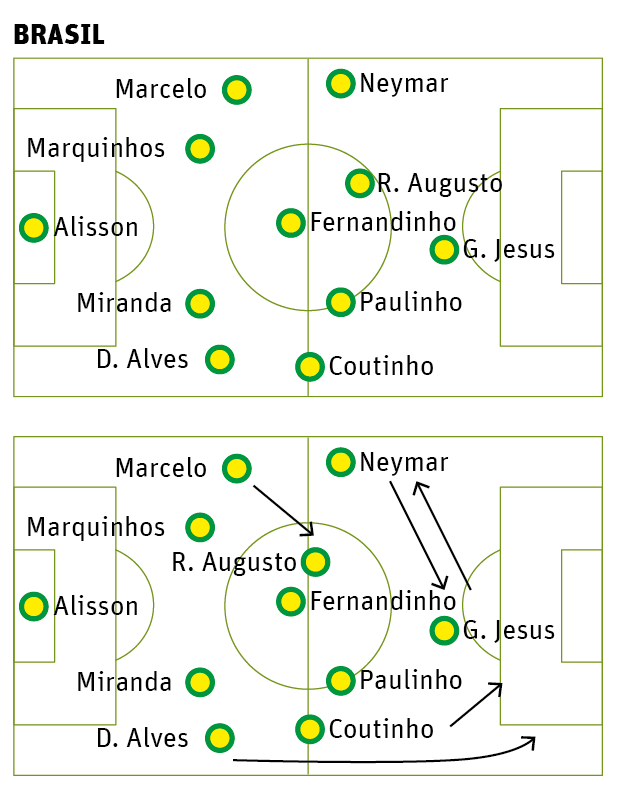 This will also be the first time Neymar and Douglas Costa work together.

Brazil is in great form, and the players are being great in club games.
Even some subs are great players. With the likes of Neymar, Coutinho, G. Jesus, Firmino, D. Costa & cia, even if they don't play at the same time, the attacking power is guaranteed.

I can't understand why Diego Alves is not being called though.
He is probably the best Brazillian GK for some time now.
Casemiro is injured, and Thiago Silva may not be able to play.
I'd say Brazil may be vulnerable in defense and let Argentina score at least one goal.

When Messi is playing, Brazil only won 1 time in 4 matches. And Neymar did not score in any of them.
Edgardo Bauza will be playing a defensive Argentina for the first time. (4-2-2)
Defense is his specialty, so maybe Argentina will be playing better today.
Especially since most Brazillian footballers aren't physical and hate tackles (Neymar for example).

Brazil still plays under a trauma - the stadium is Mineirão, where 7-1 ocurred.
On the other side, Lucas Pratto might be a surprise factor for Argentina.
Lucas Pratto is currently playing for Atletico-MG, and playing in Mineirão is playing "at home".

Curiously though, Tite calls himself a Menottist, and Bauza is definitely a Bilardist.
So this is also a clash between two Argentine football philosophies.

Messi is not human, and you can see the drastic change without him, even though Argentina have good players.

Also, why is the word 'mediocre' such a popular word in footyroom? Lol

keep an eye out for enzo perez, i predict he will be impressive on the flank, both stopping neymar and bursting forward. The Higuain+Messi combo always succeeds in qualifiers. Argentina will play a defensive 4-4-2, with 3 cdm's and di maria pushing farther forwards on the left. Bauza is reducing any risk and removed any players known to underperform (aguero, banega, rojo). All players in midfield (mescherano, biglia and enzo perez) are known for their work rate during the game. So hard to predict. Remember just 2 matches ago, Brazil was also in this position (6th), the south american qualifiers are the hardest and most unpredictable. Really hard to predict. I'm hoping argentina will win with some messi magic. Although a well earned tie will suffice.

@kirsi16: great stuff. Btw, I dint think the trauma would play a big role in this game, except for the fans. Brazil is showing a new face with the new coach, staying on top with much less pressure than Argentina.

Although I must say if they let Argentina scores in the first 10 mins. Lol history might repeat

@amir-keal Argentina needs a good coach. They have a bunch of good individual, with lots of egos... beside Messi, their strikers suck bad, like amature in front of the goals and would do the "Torrees" most of the time, which only happen to them when they play for national team, like a curse... their central mid aint that good either.

Haha mediocre is the right word to describe those not so good, and a bit overhyped type. Happen a lot in football. :D

Gonzi: true that. Enzo is in good form too, but Mars is not. Bauza is taking precaution, base on national level performance, but some how I think Aguero should start... Argentina are in dangerous position, and trust me it can turn to hell (looks at the Netherlands).

Messi injured again then Argentina will be totally screwed. Im talking purely based on stats.

This game, Higuain cant waste those chances like he did in front of the goal. Cuz sometimes, thats a key moment. And somehow I think he will do it again...

Brazil was too good. This team under Tite can really do great

And Argentina was too bad... embarrassing performance from the defense and mid... terrible

@tuan_jinn When you defender tackle blindly without looking, you know there is a problem somewhere. I really feel the Argentina team have a harder time the more they are stressed. They stressed in final because of the value of the game, they stress when they don't have Messi because they know how better they are with him and they stress against rival. It like they cannot perform with stress... that or they have a poor manager. I don't know really. :( But Brazil is looking really good this time around, if they can manage to keep this kind of performance till the WC, they might just be a serious contender. Hope they continue like that.

well they have old players, im surprised Argentia still playing the +30yo age card, World cup is in 2 years and even if Zabaleta, Mascerano and co can still get minutes at their rspective clubs, they are on the decline zone, i doubt they would be ready for 2018.
While Brazil got fast youngster, very pacy completely humiliated Argentina defensively, they also find a good proportion of stars and shadow working players who do the job, and look to their Bench, Douglas Costa, Thiago Silva, Firmino and others.... Seems like this new generation has the cards in their hands....

For Argentina, Dybala knocking the doors and Icardi should be injected quickly before 2018, i hate Biglia as a player, too slow, too easy, doesnt pass forward, Mas and Funes Mori doesnt look like National teams material. And when the Rival makes a Messi tactic, they should have a plan B what they dont have atm...