The Gunners and the Seagulls recently agreed a £50million fee for White, and the England international is set to undergo his medical in north London tomorrow.

Plenty has been said about White's price being too expensive after just one season in the Premier League and with Varane seemingly moving to Manchester for around £15m less (excluding add-ons), inevitable comparisons have been made.

Some United supporters believe their imminent signing of Varane is the better deal, but it's safe to say a selection of Arsenal fans disagree.

Ben White will turn out to be a better investment than Raphaël Varane. 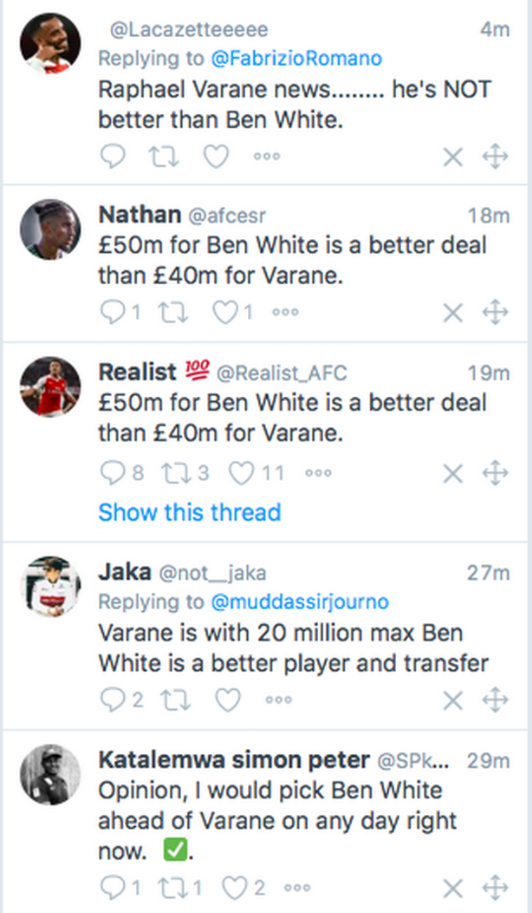 Haha exactly, Twitter is literally cancer with all the reactions

I actually expect better things from White when compared to Varane... for the early week of their first season at their new club that is. Varane will need to adapt but once he does, I expect him and Maguire to be one of the most solid pair in prem. White only advantage is that he immediatly already has some experience in the PL.

I'm actually bit jealous about Varane, can't judge White as I never seen this guy play and have absolutely no clue other than the fact that Bielsa wanted to keep him.

Tbh it's a weird comparison. The Premier League usually creates its own top-tier center halves, the league rarely imports them. It's not necessarily for a lack of trying, more that world class CB's are just never available. I cannot really think of another time in the Premier League where a club nicked one.

Ben White is a more interesting case. I remember following Harry Kane's first season at Spurs and there was big talk that United or Chelsea were going to sign him, and I was very strongly against it. A guy who had done a few loans and had one good prem season for big money? But the reality is Kane developed into one of the best strikers in the world and now City are probably going to sign him for like 120m or more.

The way I see it is that if you want English-born young talent you've got to overpay for it. Sometimes it works (e.g. Sterling). Sometimes it takes a few years (e.g. Shaw). Sometimes you become a laughing stock (e.g. Carrol). But no matter what the outcome, it doesn't come cheap.

160mill is too much for an injury prone striker, but when Kane comes back at any point in the season he's definitely a big add to the squad.

@quikzyyy you're right even breaking ffp.😄😄

well, 110 million is supposed to be accepted for Grealish, that's insane amount, the english tax is joke.