Arsenal is not doing well.

WENGER OUT is the more common phrase than any other Arsenal discussion. Obviously they will need a complete rebuild of their football. This season, Europa League is the only hope left, the hope to also keep them in CL next year.

Like it or not, I dont think Wenger would see the door, but Im pretty sure changes need to happen.

Starting with Bellerin, what do you think about him?

He used to be Pep's Barca's target, faster than U. Bolt and ony 23. Arguably one of the best youngsters. I have to go against the crowd here, in the last 2 seasons, I think he's total crap. He's only fast. His awareness, defending instinct is pretty bad. He's turning into a headless running chicken these days. 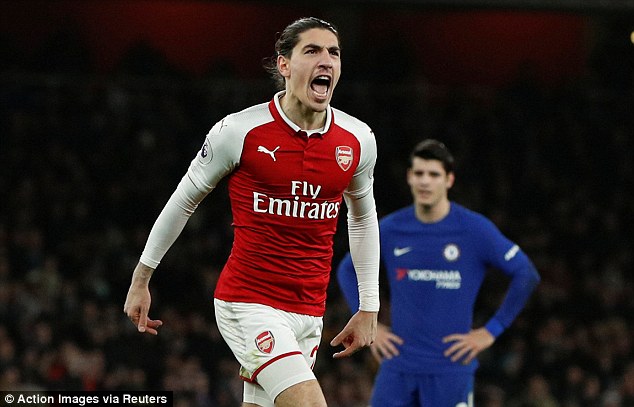 Ofc, he's not one of the few problem, this club has way much more problems. But the overhyped thing is talking his tool on him. He should leave and regain himself.

I wouldn't call him overrated, but neither any special. I wouldn't be surprised if he ended in a better team and suddenly get much better.. I was used to things when players which left Arsenal suddenly ruined their careers or just got much worse and mediocre, Nasri, Hleb, Song and list goes on..

But in recent years, our academy became simply crap, players which somehow even get into first team suddenly decline, Iwobi started well, then he transformed into Gervinho. Bellerin started well, but was so sure of his position he don't need to play at 100% anymore.

Look at Debuchy, after wasted time at Arsenal, in just 5 weeks he became Ligue 1 player of the month, scored 2 goals, lost no games and came back into World Cup nomination for France..

Depending on how management at Arsenal go, if things stay the same, he should leave to explore more opportunities to better his game. He is a fantastic player at times and when you mix in speed, he is an asset for any team. He is just very inconsistent but some of that is due to how Arsenal are playing.

He is still young and I hope he finds his feet because I like him as a player. Perhaps moving to a different team or getting a stronger coach will help him round out his game. Wenger sadly needs to leave.

Definetly not bad, but not good either, he is the kind of fullback Pep would like though cause his speed can make him a very good attacking fullback. He does lack in defense though.

He's lost his defensive touch. Lately I've seen him not track back and get caught out of position a lot leaving the right flank open. The formation of 3 at the back really doesn't suit him well. He tries to attack a lot as a wingback but he's an ok passer/crosser. 2 years ago he would have been perfect for Barca, now he wouldn't take starting role over Sergi.
All he really offers is being wide all the time and speed. Which I think he's actually lost quite a lot of recently.

he is probably worse crosser than me, sadly, 4 defenders were suiting him much more, all this 3 at the back nonsense ain't working for arsenal..

@quikzyy & @Darth & @Emo: Then he is exactly how he should be recognized at this point. Not as 3 years ago. however his price tag seems more relevant to 3 years ago.

He has dropped a lot in term of positioning and defending. He's got a bit lazier and misses that defense material which he should have.

I do blame Wenger for this, the lad is young and needed guidance. The 3 defs doesn't work for anyone, just crap.

He could be as good as Alba, and improve his skills, once he leaves Arsenal or Wenger pull himself together.

Im not impressed with his crosses either, but I love his speed on and off the ball

he has great potential in him but tbf the midfield and the team sometimes let him down. on the offensive sides, off course he can be flying in one game and missing in other games. on defensive sides, needs to improve especially on decision making.

Idk about overrated, but definitely overhyped. If it wasn't for his speed no one would talk about him. Give Jenkinson another chance.

Give Jenkinson another chance.

but why would you do that, might as well give me a chance then!

Maybe not overrated, but definitely nothing special and he is clearly declining since that season Arsenal finished second. Sadly, but it's the truth. Odriozola has taken over him in Spanish NT.

He is not linked to Barca anymore.

@tiki Techicallly, you signed Semedo so its ok isn't? Wait, is Semedo even starting for Barca, I tend to remember Sergi Roberto being chosen over him in most game.

Yep Sergi has proven his worth even playing out of position. Semedo is also solid so we dont need anymore RB.

@tiki Nice, its good to hear. And Dembele is showing some good stuff in defense as well when playing on that wing. Its looking better and better for Barca in that area. :D

I thought he was decent at West Ham, but I guess things have changed since then.