Gunners will play either Manchester United/Chelsea in the Final.

edit: i'm still drunk af but, what a performance from boooooyz, beating Liverpool & City in spare of 4 days, like what he hell is going on? David Luiz putting Carlos Puyol peformance and keeping clean sheet against City, woooooo

Undeserved win. City were far better. But since that's the only chance for Arsenal to get a trophy, the reffs helped them. But i definitely think that in final they will get smashed by Utd or Chelsea

Missed the match because ESPN put in on ESPN+ which is an extra paid service. Also missed the Man Utd/Chelsea match, but we all know that outcome as well.

Pulling for Arsenal in the final, but want to also see Pulisic play well for Chelsea. Congrats to both teams!

Showed some great touches with his passing game. The more further up the field he got the better he played. He really should be a midfeilder imo!

Pulling for Arsenal in the final, but want to also see Pulisic play well for Chelsea. Congrats to both teams!

In breaking news CAS has overturned Manchester City's semi-final result and they will now be playing in the final :p:p. The whole of England i think is behind Arsenal.

But since that's the only chance for Arsenal to get a trophy, the reffs helped them

ok boy here I have something for you, prepare for long post:

GW3: Salah is given a penalty for a shirt pull by David Luiz. After the game he admits he didn’t even notice, but stupid of Luiz to give the ref the chance. At least he learned his lesson, and never grabbed an opponent in the box again…

GW5:
Threw away a 2-0 lead against Watford at their worst… Their first goal should technically not have stood, because Deulofeu was in the box for the goal kick as he stole the ball from a Sokratis blunder. But you’d have to be a right dickhead to blame the referee on that one. It was against the rules, but it also didn’t really make a difference. They also get a penalty as Luiz trips Pereyra. Maybe he was jumping before the contact, but can’t really complain it was given. Technically two points lost through officiating errors, but I’ll not count them in the tally.

GW8: Atkinson denies Pepe and obvious penalty, and VAR (Anthony Taylor) does nothing.
I can't find the video now, but if you really want that i'll dig that somewhere for you.

GW9:Two obvious penalty shouts turned down. Here Sokratis has his shirt pulls and is clearly impeded as he is jumping for the ball. Saka is tripped in the box, and gets a yellow for diving… VAR not consulted.

GW10:
Where do I begin... A week after the Saka incident with no VAR check, Atkinson books Zaha for diving. A VAR check reverts it to a penalty, which is not the worst decision in the world. Because the worst decision in the world is made about an hour later.
Sokratis powers the would-be-winner home in the 84th minute and the goal is given. Chambers is fouled by three different Palace-players, so the goal gets ruled out by Jarred Gillett in the VAR room. There is no excuse for this. The clearest example you will ever see of officials stealing a game. We literally scored the winner. Look at Lacazette’s elation, before the goal is stolen, too. Makes it even sadder.
Also, I found this 5 minute clip leading up to Palace’s second goal. It’s nothing special, just Atkinson denying Arsenal five clear fouls in five minutes.

I must have watched this 1000 times now and still can’t see chambers foul anyone! If anything he was fouled! An explanation from @FA would be good!? pic.twitter.com/8efIDF5vBa

GW13:
The anger with Emery at the time overshadowed just how poor Atwell’s game was. None of Southampton’s goals should have stood. On the first one the ball is still rolling as Southampton takes a free kick. Atwell gives it for a situation off the ball, yet it isn’t taken where it occurs. Instead, Redmond places it where he can get it around Bellerin. Later in the game, Atwell has learned his lesson.
They also get a penalty from a complete fabrication. Tierney touches Ings’s arm, and he goes to ground because he cannot reach the ball

GW20:One of the most baffling officiating mistakes of the year was made in this game, as Craig Pawson failed to issue Jorginho a second yellow for an obvious professional foul.. Lacazette got a yellow for complaining about it. Eight minutes later Jorginho equalized, before Abraham scored a late winner.

Can anyone tell me how Jorginho didn’t get his second yellow for this? pic.twitter.com/8bDKoiIdp9

GW23:Who else but Mike Dean? Well, Martin Atkinson in the VAR-room maybe. Foul on Pepe in the box shouldn’t even need a review. But it got one, and Atkinson somehow did not give it

GW24: cannot see how Abraham isn’t interfering. The defenders cannot react to where the ball is going, if they don’t know if he is touching it or not, and the keeper can’t close the angle down if he thinks it’s possible for Abraham to hit it. Another basic mistake by the officials. I’m not claiming any points lost here though. Don’t think we would have grabbed a second if Chelsea hadn’t scored. Could VAR not do anything about that?

GW25:Lacazette is one on one with the keeper, but stops when the linesman raises his flag for this. 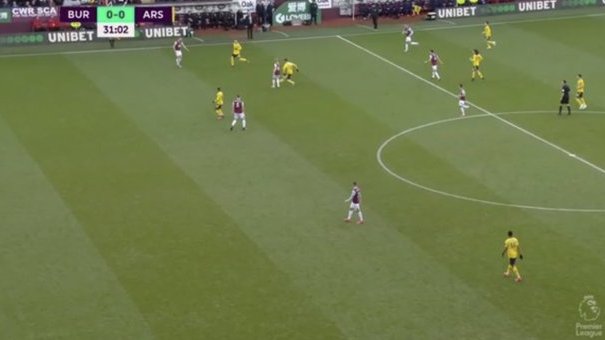 GW26:They didn’t do better next week. Mason called this off before the ball hit the back of the net.

Picture 1, Özil onside. Picture 2, Auba onside. Yet you can see the assistant with his flag up and the referee blowing his whistle anyway.

Maddening. This is precisely what they’re told not to do. This is the exact reason we have VAR, and the on-field officials mess it up. pic.twitter.com/7aDsYNQN8P

FA CUP BONUS
This foul on Torreira which fractured his ankle and ended his season, wasn't even called as a foul 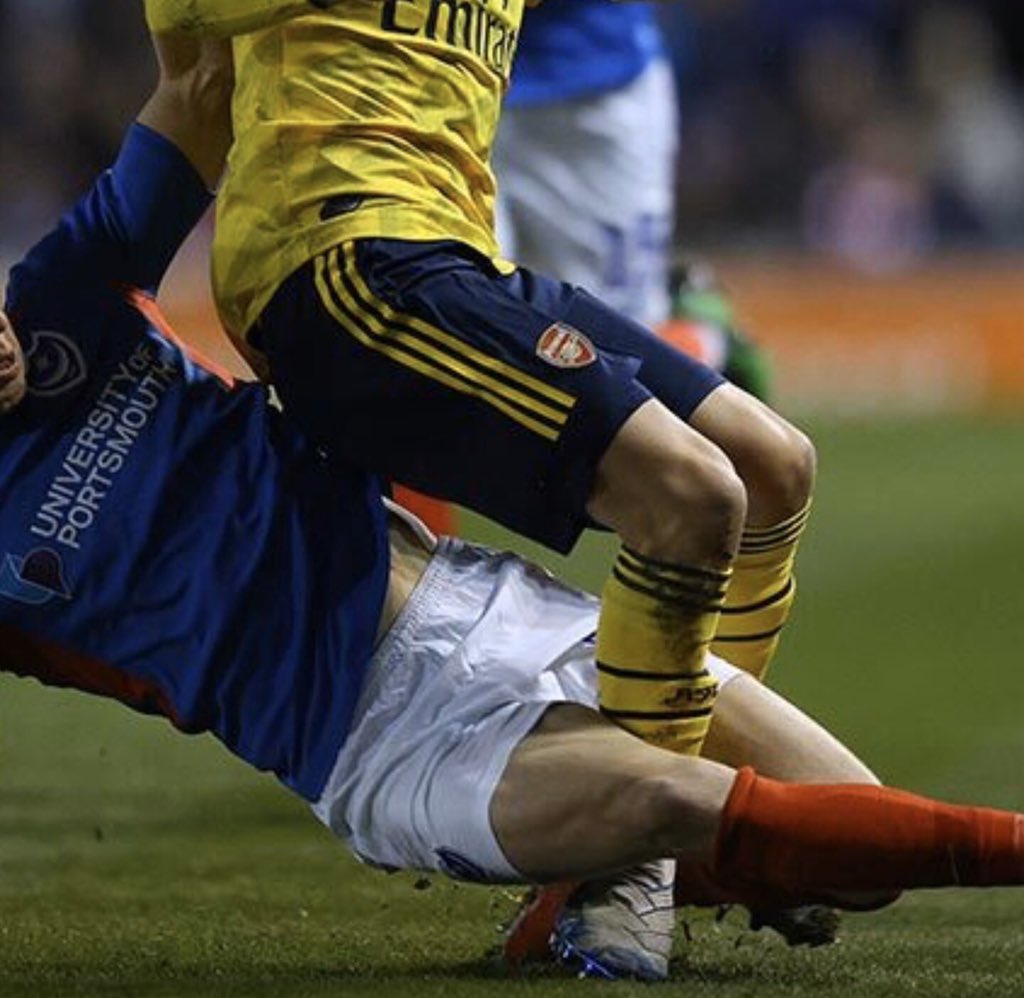 There's much more, but I only included the things, which blatantly changed the results of Arsenal games, still wanna argue referees help us?

@quikzyyy Damn mate you got your argument and proof at the ready. XD
But more seriously quikzyyy congrats on the win, was time something good happened for Arsenal and its fan and this FA Cup final is propably one of them so hopefully, you enjoy it. :)

@DarthFooty I also missed that game sadly. Kinda regret it, what a performance by Arsenal. As for the final, I'm like you, I would love for Arsenal to win but as a fellow North Americain, I'm alway happy to see Pulisic playing well. :)

@ArgjentD You should try and enjoy underdog victory a bit more lad, its ain't because a team dominate that they will alway win nor does it mean the ref had anything to do with it. Enjoy the game for what it is. ;)

A+ for effort, Probably took some time to collate. should probably make a seperate thread with it all on record. It’s been extra frustrating when you see how fragile our players are mentally and I don’t know if it’s because of the constant bullshit calls from referee’s making it seem like an impossibility to get past or if, because of their fragility, all it takes is a few bad calls for our team to break.