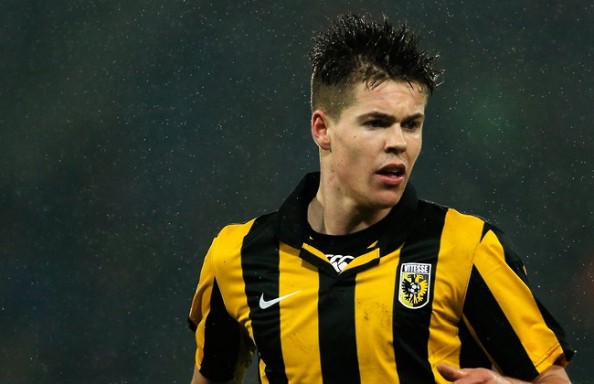 The fee was reported to be in the region of £8 million.

Chelsea Football Club and Vitesse Arnhem have reached an agreement for the transfer of Marco van Ginkel.

The player will join Chelsea subject to a medical, agreement of personal terms and legal documentation.

The fee was reported to be in the region of u00a38 million.

Woah woah woah woah woah. Now let's all calm down here. Ginkel is not better than Schurrle at the moment. They're both extremely talented but let's not compare right now.

They don't even play in the same position.

Will they even use him?

BUY ALL THE MIDFIELDERS!!!

Fucking hell, of course we'll use him. Van Ginkel has said he would only join if he got first team time and he held talks with Mourinho this week to make sure he gets what he wants. He is a deep-lying playmaker and we don't have any of those for the pivot or 4-3-3 (whichever one we use with Mourinho).

@Foota: Want Marin after his loan with Sevilla?

He is going Marin's footsteps .

I'm assuming Lamps and Justin van Ginkel Bieber will be interchanging throughout the season...
Mata & Oscar are mandatory starters for me tbh.

To everyone else: Marin was damaged goods before coming to Chelsea. Everyone in Germany's eyebrows were raised when they bid for him in the first place. They took a punt. It hasn't worked. Happens all the time in football. Don't pretend they pulled a Madrid on him when they didn't (not disrespecting RM in any way but it's the most appropriate analogy to use).

@GunnerAFC Apparently Mourinho will play a 4-3-3 formation and rotate it with 4-4-2 & 4-1-3-2. I think the best way to play Schurrle is as a Striker. But the good thing is that Schurrle can play anywhere upfront :)

lol how many players do Chelsea have ? how many GK ?? how many subs ?? its getting crazy lol
If ChELSEA don\'t win EPL next year, their will be a problem lol...

lol how many players do Chelsea have ? how many GK ?? how many subs ?? its getting crazy lol

@tiki_taka We released many and part of them were 2 GKs we need a secondary GK. I posted about the player who were released in the EPL 3 weeks ago or so :)

I have never seen such blinded comments before. People here don't know what they're saying about Chelsea at all.

@Footaholic: Thank you! Finally someone who understands what's wrong with Marin and knows it's not the clubs fault.

Interesting take on the singing by Marc Overmars (Ex Ajax/Arsenal great and current Ajax Sporting Director). He says that he genuinely concerned about how much time one of Netherlands greatest young propsects will get in England and whethet the move was slightly premature.

Overmars told BBC Sport: "Van Ginkel is a great young talent and we would have liked him to come to Ajax. Whether it is too early for him to go to Chelsea or not, I don't know. With us, he would have played a lot of games and played in the Champions League.

We couldn't have a discussion with the player as Chelsea have a co-operation agreement with Vitesse and were first choice. The important thing for the player is that he gets minutes in the first team. Hopefully the deal goes well and he will get into the team."

We'll see how well he gets on. He is supposedly very very promising.

Extremely promising. He has been voted as the Eredivise Young Player of the Year and is considered the best young Dutch player out there. Luckily for us, Roman and the owner of Vitesse are close friends which has led to us having a relationship with the club. But it's much more than that with. Mourinho has promised MVG he will be integrated in to the first team. If he didn't Van Ginkel would have stayed at Vitesse. Van Ginkel will most likely sign a contract by tomorrow (I hope, because we don't have a player like him).

It's official. Hah, that was fast.

Marco, welcome to Chelsea. What are your first impressions?

Really good, I'm very happy to be here at such a nice club with great players. I am really happy, the stadium is good and the training ground is fantastic.

I know about all the players and will meet them on Monday. I expect a lot, I've watched matches and it's really nice to be here.

What can you tell fans about yourself?

I am a box-to-box player. I cover a lot of metres and can score a goal, but I also like to defend and think of myself as a real team player.

You had a fantastic season last year, winning an the Dutch Football Talent of the Year award…

Have you spoken to Jose Mourinho?

I spoke with the manager and he had some good words for me. If a trainer like this says these things to you it makes you really proud and I am happy to work with him.

What are your personal targets this season?

I want to learn a lot, to develop myself. I want to play games and not only sit on the bench, that's what I hope for, to play in games at these great stadiums and hopefully be important for the team, whether it is from the bench or from the start.

You played alongside several Chelsea loanees at Vitesse…

Yes, I played with Patrick van Aanholt, Tomas Kalas and Gael Kakuta last season. They also helped me. I asked a lot of things about the club and they said that Chelsea is incredible. Now I am here I can see this. I think they will help when I train on Monday also.

How much do you look forward to that first day of pre-season training on Monday?

I look forward to it a lot. It's not scary, but I will be a little bit nervous maybe! Playing with players like Frank Lampard and John Terry will be a huge thing. I played three years at Vitesse, but the Premier League is very good, and I will enjoy playing with these players with this experience.

It marks the beginning of a very important season for you, which could culminate with the World Cup…

Yes, everybody wants to go there to Brazil. You have to play, that's what Louis van Gaal has said to players. I think I can play games and I think the Premier League is higher than the Dutch league, so you can learn more physically and technically, and develop. That's why I am here.