Leo Messi showed his best goals. The reaction of the Argentine is priceless 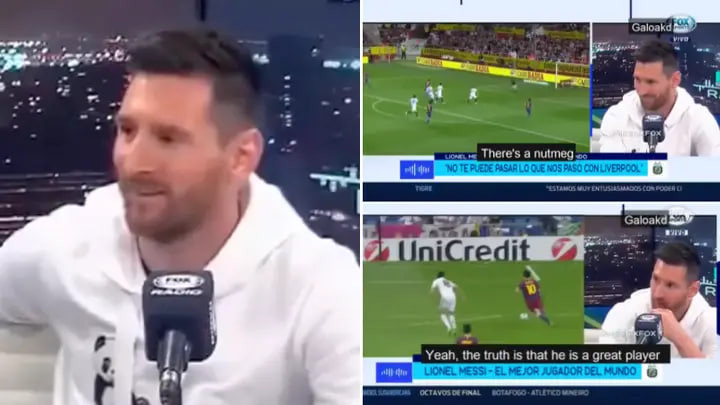 How humble he is!

A few years ago, the Argentine TV channel FOX Sports Argentina prepared a unique cut for Lionel Messi. The idea was as follows: they put the football legend in the studio and turned on his best goals. The journalists wanted to show the reaction of the great Argentinean.

It would take forever to review all the balls. Journalists were only interested in Leo's most iconic goals.

The audience noted how modestly Messi reacts to his masterpieces, including the ball scored in the semi-final of the Spanish Cup season 2006/2007 against Getafe.

"I couldn't imagine what would happen after I scored that goal. Including comparisons with the passage of Maradona," he added.

Similarly, Leo reacted to a shot wide of Arsenal's Manuel Almunia on 8 March 2011. In the exact match, the Argentine scored a double, and Barcelona won 3:1. Lionel immediately points out that it's all about Andres Iniesta's assist.

Next, Messi saw his solo pass and goal against Real Madrid in 2011. The forward named Sergio Ramos as the heaviest player he has played against. The presenter joked that the ball touched Ramos and could well be considered an own goal. Leo laughingly replied that it was his goal, not the Spaniard's.

The seven-time Ballon d'Or winner has scored almost 800 goals in his 20-year career for Barcelona, Paris Saint-Germain, and the Argentina national team.